When i decided to use the ManaSeed Base Character for the MonsterBreeder Game the huge amount of available Animations flashed me.

NOTICE: The Sprites of the ManaSeed Character are NOT part of the MSCA, they are sold by Seliel, you can find them on itch, behind the given Links !!!

I created a unity editor for creating, reworking and testing the animations of the base character. Next to including all the animations in the provided UnityAnimController, Version 2 of the MSCA also includes the Combat Animations for the Expansion Packs of the ManaSeed Base Character: Sword and Shield, Spear, Bow

Since i wanted to keep the layered structure of the asset to be able to keep using it if there would be a new version i wanted to solve the creation of the animations through script.
I think the system i developed may be helpful for more people out there, thinking that they want to use the character base.

Look at the video to get an impression what animation the MSCA will make out of CharBase und Combat Sprites of ManaSeed:

After importing the Package you will find the following structure in your Assets-Folder:

It contains the Editor Scripts as well as a Player Prefab, the Base AnimController and a SampleScene showing in the video above.

Unter „AnimationSettings“ reside the ScriptableObjects containing the animation definitions wich you can adjust for you.
For starters the definitions of the base char are included… the other animations for the combat packs are in sepearate ScriptableObjects and already provided, you can create copies and alter them to your needs. 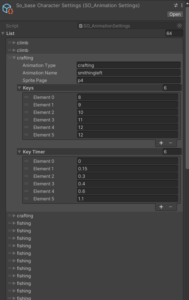 You can adjust the settings for each animation inside the scriptable object.

It wasn’t changed since the 1.3 Version, so Combat Animations are not there yet for the NPC Editor and only the sprite pages p1, p2, p3 and p4

Go to the NPC Editor Explanation

The MSCA Editor Windows changed a bit, you only need to create tree folders and then press buttons

Go to the MSCA 2.0 Tutorial

Check this if you want to use the animController in your own class:

The description for this Version is found here

You can look at the old description here